The Me Decade 04: THE IMMORTAL IRON FIST v1: THE LAST IRON FIST STORY 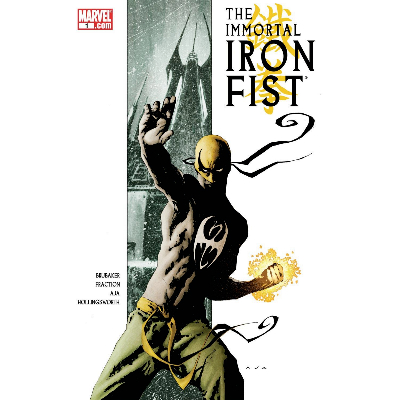 also reprinted in THE IMMORTAL IRON FIST: THE COMPLETE COLLECTION

Ed asked Kirkman first and Robert said thanks but no thanks, so Ed called me. That’s two I owe Robert (The first being, Robert’s Funk-o-Tron press was the first publisher to publish me. So like I said. Two. At LEAST two.)

Anyway. I had been the writer on PUNISHER WAR JOURNAL for about twenty minutes, it seems like. I think I had maaaaaaybe turned in the first script only. Is that possible? Jesus.

Ed had exploded at Marvel. He was about to kill Captain America and it would quickly prove to be the biggest thing in the world. He was doing X-MEN at the time too. Marvel wanted him focused there — on the big stuff — but Ed wanted the crown jewel of the Marvel empire: Danny Fucking Rand.

So the deal they cut was, bring in a co-writer (enter me) to do the slog work so he’s not late on the big stuff. That’s how my apprenticeship with Ed came to be.

The idea was all his — open up the legacy of the character and grow the world. He remembered an Iron Fist comic where an old costume was in state somewhere in Kun-Lun, the implication being there were Iron Fists before Danny. I used to know the issue number it was in but all this stuff was written before I had children and ever since then I basically haven’t slept. Anyway Ed remembered it too and wanted to know who else wore the green-and-gold.

So away we go.

Ed’s notion – the bad guys come gunning for the previous Iron Fist who had fallen into an opium den hell for sixty years or whatever, and Danny gets involved and learns about his legacy – sounded FUCKING GREAT to me. Because, I don’t know about you, but KUNG-FU BILLIONAIRE is about as perfect as a comic book character could get. And with the idea of him being a legacy character we could grow the myth, grow the world, make the pie bigger instead of just cutting what was already there into more pieces. We could ping pong wherever we wanted, we could go forward and backward, and because nobody cared as long as Ed was still doing DEADLY GENESIS and CAP then everyone was happy.

Everyone in a work-for-hire situation will have their own thoughts on this, but to me part of the gig means growing the pie. Building the character. Adding more to that character’s orbit instead of further partitioning what’s already there. I find that’s a one-way ticket to writing comics about comics, and for thirty years comics did that and its audience contracted and atrophied so much that an entire other readership grew up outside of our walled garden. Nobody gets anything by keeping our shit inbred and insular other than the Comic Shop Guy in the Android’s Dungeon.

We both loved Danny Rand as a character and we both loved kung fu movies. Ed’s wife Mel had a big ol’ ENTER THE DRAGON poster in her office for the longest time, because it’s the best movie ever made. There was a lot of stuff in the character’s continuity that strayed dangerously away from KUNG FU BILLIONAIRE so we just ignored it. That was a good lesson. That’s important. That was where I learned consistency was more important than continuity.

Continuity – the strict adherence of prior texts and their treatment as sacrosanct records – paralyzes comics all too often. It punishes new readers by their virtue of being new. It rewards trivia over opening up the world and blazing new trails. It cuts the pie into smaller pieces instead of making the pie bigger. It builds barriers and creates gatekeepers. And it’s really hard to write well.

I prefer to look to continuity for its tone and principal, for the foundational work and gestalt, to honor the core of the character rather than the minutiae of their comics. I don’t try to, y’know, fly in the face of continuity (and some times as we’ll see I have been bizarrely paralyzed by it) but if it comes to writing KUNG FU BILLIONAIRE or THE BROCCOLI ALIENS THAT BUILT K’UN L’UN I’m gonna go with KUNG FU BILLIONAIRE every single time.

We would plan most of these issues over X-Box live, playing one another at Ping Pong, as a matter of fact. Then one of the two of us would bang out notes from the session, the notes would get turned into outlines, the outlines into scripts, and Ed always had the last dialogue polish (at least to my recollection). By the third or fourth issue though I got to be a pretty good mimic of Ed’s style. Damn it… you fool.

The process changed issue to issue.

Back then I would read reviews. One of the reasons I stopped was, I never once read a review that pinned who exactly did what and yet they were always written with a tone of NASA-like mathematical certainty.

No one but me, Ed, and Warren knew and by the end we were, like Paul drumming on “Back in the USSR,” pretty seamlessly integrated.

David. I don’t even know how to tell you how I feel about David Aja. I can tell you that when I picked up his Eisner for him last week, I thanked the voters not just from him but from his biggest fan, WHO IS ME, and I meant it down to my toes.

Rereading IMMORTAL IRON FIST, I’m delighted to see as much Sienkiewicz in his work as there is; I confess I’d forgotten. I can tell you that the root of HAWKEYE is in issue three, the page where Danny outraces a helicopter. David wrote to Ed and I and said, “I know where you want him to start, and I know where you want it to stop, is it okay if I sorta get him there my own way by the end of the page?” And we said sure and that’s what came back.

I made the mental note.

How incredibly lucky we were. Are. I make that note every day.

I remember coming up with all the old Iron Fists being like the easiest thing I ever wrote. I sat down and, boom, out it all came. I don’t remember when I came up with the 33 thing (Uh, spoilers?) but as I recall all the Iron Fists had dates, too, so clearly I had it together early on. Maybe it was Ed’s thing, I don’t know. If I’m looking for referents I see both Grant Morrison’s SUPERMAN stuff from DC 1,000,000 and Ellis’s PLANETARY with all the proto-superhero comic secret history stuff, but I don’t remember it being conscious, and I’m seeing it now, rereading. Like the way I can never recognize your own scent, I can’t see my influences as they play out sometimes.

It’s all in a notebook somewhere in a storage shed where my notebooks go when they, or their projects, die.

I remember feeling like I could write The Pirate Queen of Pinghai Bay forever. I remember she was a reaction to how woefully underused Chow Yun-Fat was in that dumb PIRATES movie.

I remember my friend Charlie Chu – now an Editor at Oni – gave me a stack of Shaw Brothers movies and I watched them constantly. In fact, here in town, next week, they’re showing a print of EIGHT DIAGRAM POLE FIGHTER which is and was one o fmy favorites.

Ed gave me a book called KARATE IS A THING OF THE SPIRIT written by Harry Crews. A trash novel. Amazingly great. Totally insane. We came up to Portland to do a signing and I put it in front of the table. “Why is that there?” someone asked. “Because I think we should respect it,” I said.

I read a story about a guy trying to use kung fu to stop a train in China. Somehow that turned into the maglev runner that spans the book. I dunno, Rand had to be making SOMETHING somewhere, right? The trains became the metaphor for the whole book though, the tracks running from one time to another, stitching together generation after generation.

Of course that thought didn’t occur to me when I thought “I want to see Danny punch a train” but there you go.

If you divide your stuff into “What happens” and “What’s it about,” sometimes the “what’s it about” stuff comes after. It’s okay.

I remember the day we got the page of Danny kicking the guy through the train was one of my very best days in comics. And how McGuire-esque the elevator page turned out, and how funny it was to see the first time.

When he was at Saturday Night Live, Seth Meyers showed me he had the page printed out and pinned up at his desk.

I remember trying to build a secret history around Orson’s father. I know we see not just his father’s generation of adventurers but the one previous to that – I’ll probably remember more of that stuff in the next volume where it really gets going.

I had a whole thing about these Masters of Forbidden Kung Fu I started to play around with but never actually got to writing (They show up here, in IRON MAN, in X-MEN, even, but more on that when we get there). It would’ve been, I don’t know, year three on the book if we went that long. A whole bunch of Kung Fu styles Danny had never seen and had no idea how to fight…

I remember Ed writing for John Severin making him the happiest I’ve ever heard him sound. I remember thinking I’d write Danny and Misty forever. Literally forever. I love the ex-you’re-not-over dynamic between them. More on that later, for sure, but man. I love the DAUGHTERS OF THE DRAGON. One of the many hundreds of pages no one but Warren Simons read was a pitch reimaging them as a grindhouse-y lesploitation duo called SISTERS OF THE DRAGON. I think that was around the time I pitched BLACK CAT WHITE TIGER which would’ve been a women-in-prison-on-the-run thing, like Eddie Romero’s BLACK MAMA WHITE MAMA.

Again, hard to believe they didn’t pull the trigger on those pitches from a total unknown weirdo.

Most of all I remember how much fun we all had.

I like it when reach exceeds grasp; maybe these are the kinds of characters that are made for that kind of approach. For whatever reason they let Ed and me go hog-wild on IRON FIST. Editor Warren Simons made it all happen and I think you can see that same strategy in the way he runs Valiant these days.

I think the trick is maybe to always write the books you want to read no matter who hired you, no matter for whom you write.

Also around this time I left my previous career with all the dignity and aplomb you’d assume. I remember a pregnant Kelly Sue and I coming to HeroesCon so I could tell my parents I’d quit my job with a mortgage and a baby on the way but it was okay, I was already writing a book and a half at Marvel and my future was gonna be in COMIC BOOKS…