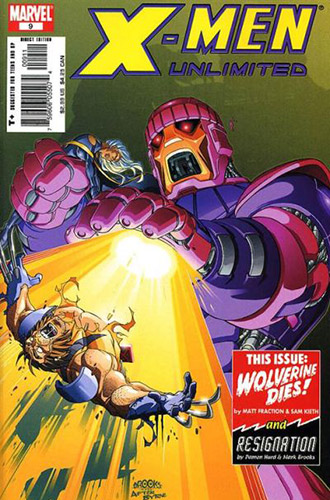 I wrote a graphic novel called LAST OF THE INDEPENDENTS that Kieron Dwyer drew. It was well received and I made sure to give it to all sorts of people in and around comics, including those that could hire me to write more. Axel Alonso was one of them. Axel liked LAST OF THE INDEPENDENTS enough to follow up with me after some San Diego or the other and he put me with his then-assistant Warren Simons, where my career as a pitcher began. It was 2004. (So I guess I should’ve done this two years ago).

Warren gave me a shot pitching X-Men short stories for an anthology series called X-MEN UNLIMITED. I suspect that there were lots of folks like me that got their first crack at a Marvel story in that book, or books like it. The mission directive for something like that is pretty simple: evergreen stories about X-Men characters. Eleven pages. How much damage could you do? Swing for the fences.

While I had grown up in the X-Verse it had been a few years since I dipped my toe in the waters. Changing tastes, no money, samo-samo. So when the offer came from Warren I went to a comic store and bought one of every X comic they had on their stands to take a survey of the landscape. I came out a little more confused than I came in, I think. That confusion would pay off when I actually INHERITED the UNCANNY X-MEN title years later – that’s where the ‘dad captions’ came from; I figured if I was lost my Dad sure as shit would be lost, too, and rather than field phone calls I’d do everything I could to own having that massive of a cast…

I suspect it was pretty much your standard X-MEN reading experience – some you like, some you don’t, some intrigue you, others confuse you, and some seem to have no effect at all.

I went to my shelves and reread the MARVEL ESSENTIAL volumes of X that I had. These reprinted cheaply and in black and white big twenty-issue slabs of comics. They reprinted the Claremont/Cockrum run on the title and then the Claremont/Byrne run, by anyone’s measure the title’s creative high-water mark.

There’s a lot that can be (and has been) said about this era of X. What hit me hardest – so much so It’s what I want to write about now – is how narratively dense those comics were. And they were almost all seventeen pages. Comics in 2004 were 22 pages (they’re 20 now). Think about that. Seventeen pages. It’s as remarkable now as it was then.

That stayed with me. Especially when Eric Stephenson at Image would ask me, in 2006, if I would pitch him a series to be published in a format Warren Ellis cooked up called slimline where there was 16 pages of story and like 6 of backmatter at the end. Process stuff, bonus material, letter columns – that sort of thing. That’s where CASANOVA came from. There and LUTHER ARKWRIGHT.

I remember I had a notebook and I just made a list of all the X-Men characters I liked that I could think of. Literally anyone.

While that starts off as you’d imagine, with big guns like Wolverine it very quickly devolved into “…What was that dude’s name, not Scalphunter but the Marauder that had the harpoon OH SHIT HIS NAME WAS HARPOON.”

I think I narrowed it down to like twenty-five characters. You’ve heard of maybe nine of them.

Here’s some advice, though – when pitching Marvel or DC and showing a sample of your work, maybe don’t write about characters nobody but you and me and the editorial department have heard of. Because 1) nobody cares as a practical concern [They care very much as fans but, like, Harpoon never sold a book]] and 2) Too obscure and you may as well just be showing them something you yourself created. They need to see how you write these iconic THINGS y’know? Can you write SPIDER-MAN and make him sound like SPIDER-MAN? That’s a thing an editor sweats. That’s a thing you have to show. These folks want to see how you handle the family Cadillac, not watch you showboat on a boutique Vespa.

I made a list of each character, skipping a line between each (this was in my notebook; I try to spend as much time in a notebook as possible to rest both my eyes and hands from working on a computer). Then I set about turning each into an active-verb sentence. “Nightcrawler chases down a killer and hears his confession.” “Emma Frost saves a teen runaway from a human trafficker.” “Harpoon cleans his harpoon,” or whatever.

The story that would eventually become my little short story here was something like “Wolverine remembers all the times he should have died.”

Those are always kind of fun stories, right? The ones that dance between raindrops of continuity and fill in some little nook or cranny you maybe never knew existed? Shit, maybe they aren’t, and that’s why there’s not an X-MEN UNLIMITED anymore, what do I know?

The idea was I could just cut around to a zillion different moments in Wolverine’s life and times both in continuity and in moments I’d make up — that way my wee eleven pages could feature appearances by Literally Any Character At Marvel I Ever Wanted To Write Because Surely There Was No Way In Hell They Would Hire Me Again. Wolverine’s a pretty great character for that kind of thing.

That’s when I learned the one thing that literally everyone does, the first time they write for Marvel:

Because I sure as shit did. I don’t think any of those points survived my first draft but goddammit I tried.

Here’s where I confess I’m writing this without having ACTUALLY reread the issue in question so at this point I’m just going on memory. First goddamn column and I’ve already blown the premise twice.

I got to work with Sam Keith, which pretty much melted my face off. I loved THE MAXX.

I wrote a bit where Wolverine lit a cigar off of his own burning forearm that got axed because of a ban on showing smoking on-panel in Marvel books. (Oddly enough, this would only come up twice: at the very beginning of my time at Marvel and at the very end…)

Mark Brooks did an amazing homage cover and was a good sport about it.

And Sam thinks the sound effect should be SINKT. Not SNIKT. SINKT.

How do I know this?

Sam sent in his pages with the SFX lettered right on the boards, as part of the art. This is sound practice if you’re in the onomatopoeia business – get your artist to make the effect a part of the panel composition instead of relying on a letterer to cover art up. No one works the panel better than the person drawing it.

One downside is, if, like Sam did (at least in 2004) and you still worked with real ink on real paper, you send the art in or you scan it and email it and if you’ve organically lettered the sound effects into your artwork, the way Sam does, the way all right-minded artists do and right-minded writers ask their artists to do, if you, say, take Wolverine’s trademark sound effect and invert two of the letters as a matter of personal preference… it’s hard to fix.

As I recall, Warren called Sam. Effusive with praise at first, he then mentions oh, hey, the sound effect for Wolverine’s claws, it’s “SNIKT” not ‘SINKT.’ To which Sam said something like “Yeah, but I like SINKT better.” Can you change it? “Nope, nope, it should be ‘Sinkt’.” Sam you know we can’t let this out of here like that. It’s gotta be fixed and if you don’t do it someone in the bullpen will. “Whatever!” *click*

I gotta say, I admire his perseverance.

It would be two more years of pitching before anything happened for me at Marvel, but once it started, it wouldn’t stop. Next time we’ll start PUNISHER WAR JOURNAL: CIVIL WAR, which takes us properly into 2006.