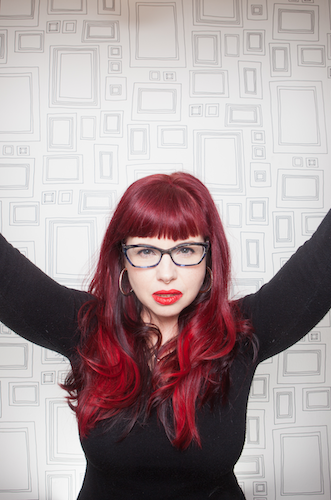 Kelly Sue will be on Live Wire with Luke Burbank Thursday, September 12 at 7:30 p.m. at the Alberta Rose Theatre. The line-up for the show is stellar—alongside Kelly Sue will be Rhys Darby, Ahamefule J. Oluo, and Cataldo! If you’re a Portlander, or if you’re in town for Rose City Comic Con, come hangout!

You can learn more about Live Wire here.

If you want information about tickets or the night’s show, go here.

From the Live Wire event:

“Rhys Darby is a comedic adventurer of the highest order. An ex-soldier and former signaler trained in Morse Code for the New Zealand army, Darby is also a twenty-year veteran of standup comedy. Best known as the hapless, well-meaning band manager Murray from HBO’s beloved musical comedy “Flight of the Conchords,” Darby has also been in feature films like “Yes Man” with Jim Carrey, “Lovebirds” with Sally Hawkins, and most recently in “What We Do in The Shadows” as alpha werewolf Anton. When not adventuring across the screen for film and TV projects, Darby takes to the stage to perform his unique standup blend of sound effects, characterizations, and askew observations. If comedy is an adventure, Rhys Darby is the explorer we want leading our expedition.

Ahamefule J. Oluo is a Seattle-based musician, composer, and comedian. Oluo co-founded The Stranger Genius Award-winning hard-jazz quartet Industrial Revelation and is also leader of the jazz-punk trio The Honorable Chief. He has collaborated with Das Racist, Hey Marseilles, Macklemore, Tacocat, Cataldo, and many others. He works extensively with his wife, writer Lindy West, and co-produced comedian Hari Kondabolu’s debut album, Waiting for 2042, for Kill Rock Stars. He was the inaugural artist-in-residence at Seattle’s Town Hall, and his 2014 performance of “Now I’m Fine” at On the Boards received universal acclaim. In 2015, Oluo was featured on This American Life.

Kelly Sue DeConnick got her start in the comic book industry adapting Japanese and Korean comics into English. Today, DeConnick is best known for surprise hits like Carol Danvers’ rebranding as Captain Marvel and the Eisner-nominated mythological western, “Pretty Deadly.” The latter was co-created with artist Emma Ríos. DeConnick’s most recent venture, the Eisner-nominated sci-fi kidney-punch called “Bitch Planet,” co-created with Valentine De Landro, launched to rave reviews in December 2014 and has received multiple awards. DeConnick lives in Portland, Oregon with her husband, Matt Fraction, and their two children.

Cataldo excels at distilling the specifics of the world into lovely gems of songs. Their 2017 album “Keepers” was called “nostalgic, and effortlessly, poetically profound,” by Nylon, and their new album “Literally Main Street” will be released this fall. Cataldo, the name for creative work put out by Eric Anderson, began work on “Literally Main Street” by participating in an exercise with other Pacific Northwest musicians where they wrote and presented twenty new songs in one day. Out of that massive output came the seeds of the new songs as Anderson probed his memory for specifics, details, and emotions. The result is an album that is purposefully slightly sideways and off-kilter, like life, and invites you to take a look back at “small-town adolescent weirdness.””